What makes the world go ‘round? To the average person, their answer may be air, water, or food. To some, they may argue that it is actually oil.

Crude oil, which is a type of fossil fuel, is a naturally occurring petroleum product comprised of hydrocarbon chains and organic materials, which can be refined to produce a variety of products including gasoline, diesel and jet fuel. These types of fuels have been traded and consumed since well before 1900 and continue to arguably be the lifeblood of the world economy. With the title of being the so-called lifeblood of the world economy, comes great responsibility – the price of oil can largely affect country and global economies.

What is the history of oil?

The history of oil goes way back. How long exactly, you ask? The first commercial oil well was drilled in Azerbaijan almost two centuries ago – in 1847. The world’s top producer of oil (the United States) discovered oil approximately 12 years later with the first oil discovery in Pennsylvania. Initially, early demand for oil was quite low, but soon after the first commercial well that was capable of mass production was drilled in Texas, producing more than 100,000 barrels of oil in one day. In the Middle East, oil was first discovered in Iran in the early 20th century, and shortly after the first large-scale drilling projects began in 1908.

Oil was, and continues to be a hot commodity, given the dependence of countries’ economies on their energy sectors and large volumes of consumption throughout the last century.

What are the supply factors to the price of oil?

With any type of market, there are various different supply factors that can affect the price, including the price of oil. Some supply factors are The Organization of the Petroleum (OPEC), non-OPEC factors and external supply shocks.

We are sure you have heard of OPEC at one point or another. If you haven’t, don’t worry, that’s what we’re here for. Here’s a quick background: Established in 1960 at a conference in Baghdad, OPEC is a permanent intergovernmental organization of 13 oil exporting nations that coordinates and unifies the petroleum policies of its members countries. OPEC, which controls approximately 40% of global oil supply, aims to unify a view on oil production quotas to protect against overproduction and rapid price depletion of oil, which therefore ensures the stabilization of its prices in international markets. But, nothing is perfect. Imperfections in OPEC’s policy do continue to exist including unexpected outages, regional politics driving for market share or non-compliance by member states to adhere to the agreed upon quotas.

Countries that are not members of OPEC, such as the United States, can also have huge effects on oil prices. For example, the United States went from one of the world’s largest consumers of energy to one of the world’s largest producers of energy. They didn’t stop there – they are now the world’s top oil producing country in the world. This has been achieved largely because of its shale oil production in the last decade, giving them a lot of power over oil prices.

Events that are not directly related to supply can also have an effect on oil price, ranging from geo-political events – such major weather events – to geopolitical or regional instability. The Arab oil embargo of 1973, also known as the first “oil shock,” saw the oil price rally by approximately 230%. More recently, in 2017 OPEC decided to curtail its production, which also led to an oil price rally approximately 7%.

Major weather events can not only cause major destruction to infrastructure and markets, but they can also affect the oil price. A recent example of this is when Hurricane Katrina barreled through the United States in 2005, causing major damage to oil supply infrastructure in the region, leading to a supply shock to global markets. 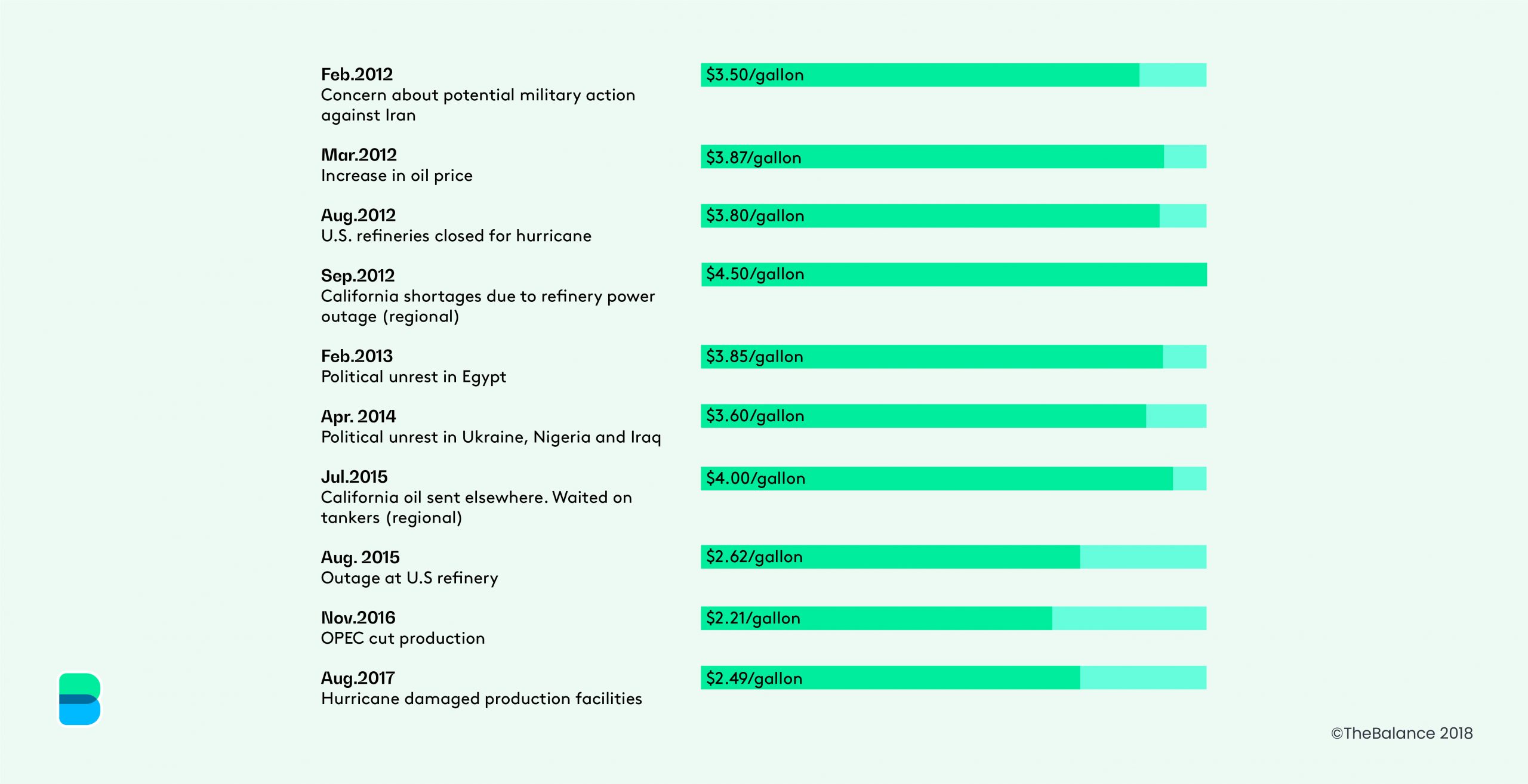 What are the demand factors to the price of oil?

In addition to supply factors, there are various different demand factors that can affect the price of oil. This includes most notably the performance of the world’s biggest economies, market sentiment and alternative energy.

Economies that provide major demand for oil in the world include the United States, China, Europe and India. Healthy economies typically lead to increased demand for oil, while stagnating economies usually have a limited demand for oil. Therefore, if there are any factors impacting healthy economies, the oil market will surely feel it in the form of a demand shock. The most recent example of a demand shock has been the COVID-19 pandemic, which has seen countries enter into and out of lockdowns beginning in early 2020. With domestic and international travel restricted, businesses and industries have limited their operations, which in turn has had a direct effect on demand for oil.

Market sentiment and speculation in the market is often another major contributing factor to the price of oil. The oil market is highly sensitive to speculation driven by factors such as economic indicators or rumors. This includes any speculation about future events, such as impending sanctions being placed on an oil producing nation, which would in theory equate to a cut in oil supply and in turn raise the price of oil. On the other hand, news of an OPEC announcement to increase production would lead to an increase in the oil supply to market and the result would lead to a decrease in the oil price.

Green energy, or alternative energy, is also beginning to present itself as a major factor affecting oil demand. In the last ten years, alternative energy has made its way to center stage and governments have been increasingly looking to sustainable energy given the positive impacts on the environment, among other reasons. Technological developments in sustainable energy sectors are making it an increasingly viable option and this trend is expected to grow over the next few decades.

How does oil price impact spending?

The amount that local governments and economies depend on oil affects the...

How do oil producers balance budgets?